There was also management which included these cottages in Fulham. As far as I know these were bought by a client in 1856 and managed by us for some considerable time. Unfortunately I don’t have a record of their sale. 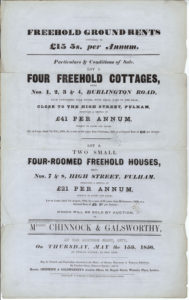 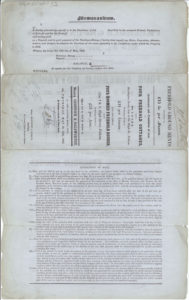 It’s difficult to know if these properties still exist as I’m sure that, at the very least, they have been renumbered since 1856 and Fulham High Street been extensively redeveloped. So I’m not even sure where 7 & 8 were.

The firm rolled down the shutters sometime after War was declared in 1939.

On the 18th September 1939 Lt. Wheeler joined the Royal Army Pay Corps as a paymaster stationed in Sidcup where he lived. By the end of the war I believe he had become Major Wheeler and this was where he met my father. Major Wheeler was my father’s commanding officer, when my father, Sgt. Ivor Martin, left the army and went straight to work at Harvey & Wheeler’s office at the invitation of Mr Wheeler.

My father always said that he was sent by Wheeler to meet with Harvey, who took him to a ‘bombed out basement’ at 17 Lower Belgrave Street with water dripping in – he dug out the pre war files, and started bashing out, on a typewriter, letters to the old clients. Which included Boots, Dunn Bros etc. This was a letter informing them that “Following the cessation of hostilities we are recommencing operations and should be pleased to hear from you with a list of your current property requirements” He received many favorable replies eg “we are pleased to hear that you are recommencing business. Our current requirements are shops of X sq ft in the following town……’

Once he had a number of enquiries for the same town, he would go to that town, draw up a street plan (which are all now on permanent loan to the University of Liverpool) and then, judging from the look of the shop frontage (i.e. old fashioned or unmodernised ones) worked out which were the family owned shops, go to the rates office and get the names and addresses of the ratepayer (all in public domain in those days) before going back home. The following day he would bang out on his typewriter the same letter to all of those he thought might be willing to sell their premises including the line “in the event of a successful transaction we will be looking to you for payment of our fees which will be…..”.

One of the things that made this possible, and which he said in those days was like’ gold dust’, was a large box of pre-war envelopes. So much so that when someone heard he had them he was offered a hefty sum of money for them however, he refused as they were too valuable to sell.

After the war Mr Wheeler continued to work but the day to day running of the office was carried out by my father. Mr Harvey retired to Broadstairs after the war due to ill health. The sea air must have done him some good as he died on Christmas Day 1961 aged 77.

On a typical day Mr Wheeler would leave Sidcup after nine to avoid the crowds, arrive at Victoria and walk up to his club, the Reform, for sandwiches and coffee, then walk back to the office which was at 17 Lower Belgrave Street, open the post, discuss business with my father and leave early to again, avoid the crowds. Mr Wheeler was diagnosed with cancer and died on the 3rd May 1952 aged 61.

Following the death of Mr Wheeler, Mrs Wheeler and my father created a new partnership in order to keep the firm trading. This was despite the advice of her solicitor at the time to sell the business. She told her solicitor ‘it was always my husband’s intention to sell the business to Mr Martin’. Mrs Wheeler had little to do with the trading side but clearly her involvement kept the business running during the difficult 1950’s. I have the old accounts for most of the 1950’s and it was only from the middle of the decade that things start to turn around. In the sixties and seventies she gradually became less and less financially involved with the company.

The sixties and the early seventies saw the business expanding and moving premises during the 1960’s, to new offices at 65 Ebury Street in Belgravia and just around the corner from Lower Belgrave Street. It was a very nice building and I remember it well as a child. Dad had a Trimphone on his desk for his private line. I thought it was the coolest thing I’d ever seen! We were the agents for the controversial Tricorn Shopping Centre in Portsmouth, the agents for the redevelopment of the New Broadway Shopping centre in Coalville as well as selling and acquiring several landmark buildings around the country.

One of the partners at that time was Godfrey Young who was an auctioneer. And one of our more famous sales was Bertram Mills Circus. 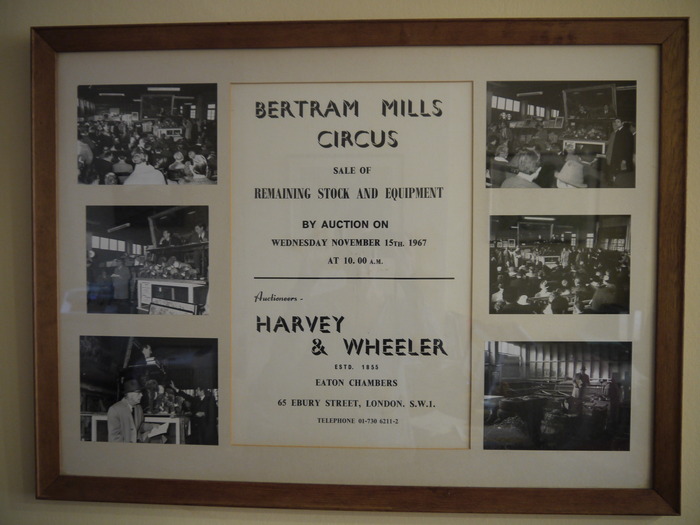 From its Belgravia base the practice continued to evolve providing a consultancy service throughout the U K to a wide variety of clients not only in the retail sector but also industrial, offices and leisure. We were dealing with a diverse range of properties from factories to Cinema’s on behalf of clients such as Honeywell, Crane Fruehauf and Mecca Entertainment. Harvey & Wheeler were the agents for Honeywell, Army & Navy stores, Crane Fruehauf, American Hoist and its subsidiaries, acquiring properties from Dundee to Accrington and South Wales. Ivor Martin had a strong interest in the arts and we also acted for Contemporary Films, the oldest independent film distribution company in the UK, and with Mecca acquired or disposed of Bingo Hall, Bowling Alleys and even a Casino in Derby. We also sold Sir Michael Redgrave and Rachel Kempson’s house in Belgravia

In 1977 we moved again, due to redevelopment of the Ebury Street offices by the Grosvenor Estate, to 82 & 83 Chester Square.

The partnership now included Bob Carini who had been working for Harvey & Wheeler for some years. At about the same time Ivor was asked to deal with the sale of a Georgian house in Gibsons Hill SW16. Although we had been dealing with a small amount of residential property in Belgravia, this was our first house sale south of the River. The house was sold very successfully and a friend of the owner phoned my father up and asked if he could sell his Georgian house in Dulwich Village and this was what really led to our specialisation in, and eventual move to, Dulwich. We sold a lot of the Georgian houses in Dulwich during these years and quite a few in Camberwell Grove too. In 1979 I sold Mark Knopfler his first house which was in Camberwell Grove. He no longer lives there however.

The first Dulwich office was at 133 Half Moon Lane which we moved to in 1983 just after my father had retired. There was a new partnership with Bob Carini and my brother Malcolm Martin, both Chartered Surveyors, and myself. The early 1980’s were an exciting time in the UK property market and we sold a huge number of houses and flats in Dulwich, Herne Hill and much of the surrounding area, with the emphasis on period and unusual properties. We opened another office in West Dulwich at Croxted Road and finally consolidated the business and moved into Dulwich Village. By this time Malcolm had left the partnership to concentrate on another project and the partnership consisted of just Bob and myself with a slimmed down staff including Cathy Burns who is still with me today. Bob retired in 2008 and I have carried on as sole principal.

Please note that the copyright for all images in this article is owned by Harvey & Wheeler. Feel free to share but please do attribute to Harvey and Wheeler and link back to this page.